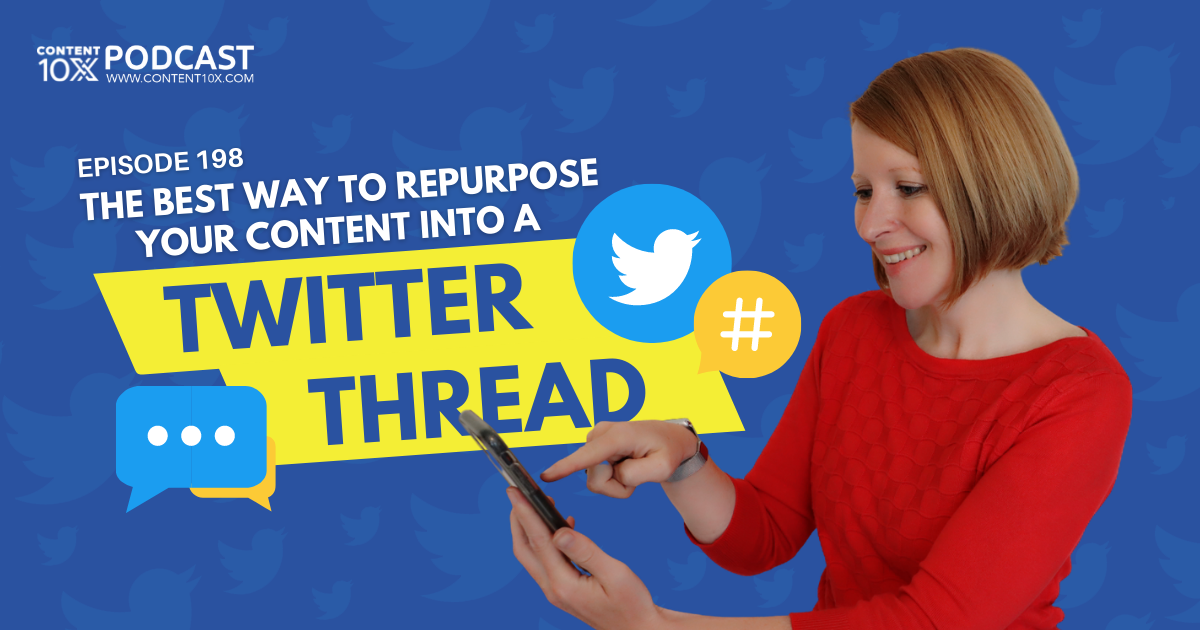 Threads are proven to boost your engagement on Twitter. But how can you use them for repurposing your content?

If you create long-form content, it can take a lot of creativity to repurpose it into bite-sized (or should I say crumb-sized) pieces of content which fit Twitter’s character limit.

This is why threads are so great. They give you more flexibility so that you can repurpose your content into tweets that are easier to digest.

Plus, they’re a huge hit with Twitter users! They get better engagement, generate more impressions, and can make a bigger impact than just sharing a single tweet.

A Twitter thread is a series of connected tweets, published altogether, in an easy-to-read chain.

It means that instead of being limited to posting just one 280 character tweet at a time, you can post as many as you like, all joined together – but still in max 280 character chunks.

Because Twitter only shows the first tweet in a thread, people usually indicate that tweet is part of a thread by writing the word “thread” or using the thread emoji.

Here are just a few brilliant examples of Twitter threads:

Before I dive into how to repurpose content into threads, here’s two big reasons why you might want to give it a go…

Threads are really popular. In fact, in an experiment by Buffer, threads got 63% more impressions than a single, non-thread tweet, and 54% more engagement. This means more eyes on your content, more comments, likes, and a greater reach too!

Repurposing your content into a thread, as opposed to a single tweet, is likely going to generate a much better ROI!

2. A more comprehensive way to get your message across

Twitter’s character limit can be really restrictive, and you might struggle to communicate what you need in a single tweet. Threads give you the flexibility to expand on a point, give more value, and get into some storytelling.

Threads are a brilliant example of how a social media platform has listened to their users, evaluated their needs, and adapted for them. Content creators use platforms to craft stories and, if platform limitations get in the way of that, they often find ways to overcome them.

That’s one thing that I find really interesting about Twitter threads – their journey from user-created content to platform-specific feature.

Before Twitter introduced this functionality, users would indicate that a tweet was part of a thread (using numbers, e.g. 1., 1/10, the thread emoji, or simply saying “a thread”) and then continue replying to their first tweet to create a thread. It was up to the reader to then visit the writer’s profile and read each tweet in order.

Sure, this was a slightly more complicated and laborious way of getting the message across – but it was sometimes the only way of getting around the character limit.

This is something we see time and time again with micro-content platform features. Look at TikTok and Instagram Reels, for example. When people want to post longer videos than the platform allows, you may see them split up their content into a part one and a part two. In some cases, I’ve seen videos that are 50+ parts long!

In all cases, platforms have taken onboard how users want to communicate their messages and have adapted. TikTok and Instagram Reels increased their minimum video length, Twitter increased its character count, and, of course, added the thread function too. All of this in response to user behavior.

It seems to me that what initially draws people in is the challenge to create micro-content in new formats. But as more people use the platforms, people stick around to watch/read/listen to their favorite creators.

As this happens, it makes sense to loosen the restrictions, and let the creators take the reins.

This is exactly what’s happened with Twitter. By letting its users define what Twitter threads are, and how to use them, they could develop the content distribution method that they actually wanted.

I will admit, I have a bit of a bee in my bonnet about poor repurposing into Twitter threads…

Threads are so popular that platforms such as WordPress have developed automatic blog-to-thread repurposing tools. These do exactly what they say on the tin: turn your blog post into a thread. No platform-specific changes. Just straight copy and pasting from blog to Twitter.

While this is arguably a great way to save yourself some time, it’s also a classic example of bad repurposing.

Repurposing is NOT copying and pasting.

Repurposing is all about paying respect to each platform, so you can authentically connect with users in their chosen environment. It’s about communicating your messages in ways that people have actually signed up to hear it.

Now, I don’t know about you, but when I go onto Twitter, I’m there to read tweets, not blog posts cut up into 280 character chunks…

Copying your entire long-form content over into a thread is the worst way to repurpose your content. As they say, just because you can doesn’t mean you should.

With that rant out of the way, here are the things you should do when repurposing your content into a thread.

1. Decide what you want to share in your thread

This might seem like an obvious first step, but I want you to think about the content you’re repurposing and what parts of it you want to communicate in a thread.

Perhaps it’s a step-by-step guide that will easily translate into a one-step-per-tweet thread? Or maybe it’s a discussion that you could share some key points from? If you segment your content, you could write one tweet per segment, summarizing what you’ve covered or teasing each topic.

You might want to go all-in with value and share all the most important points of your video/podcast/blog post. This is a great way to share the highlights with those people who just don’t have the time to check out your long-form content.

Or you might want to use the thread to give people a taste of the longer-form content. Fascinations are a great way to do this. Copywriting expert, Joanna Wiebe, shared how you can write these like a professional in our interview in episode 188 of The Content 10x Podcast. Read or listen to that here.

Think about the first tweet in a thread as the headline. It has to grab the attention of the reader and make them want more.

Don’t forget to indicate that it’s the start of a thread too! Actively encourage people to click, and they will.

The first tweet is arguably the most important but remember that people can lose interest at any time during a thread. So while it’s vital to get that initial click, keep in mind that you have to keep people compelled to read all the way to the end – otherwise they simply won’t.

A Twitter thread is the highlights, not the extended director’s cut, so write as many tweets as you need, and no more.

Adding multimedia like gifs, images, videos, screenshots, and even emojis, is a great way to liven up any thread. These definitely increase the value of your thread, make it more shareable, and engaging too.

Also, as mentioned above, consider each tweet length. If you were writing a blog post, you’d try and vary sentence length and structure, so try to do the same here. Typically, shorter tweets perform better, so don’t feel like you need to stuff each post to the brim. Spread them out and make the thread scannable.

5. Provide a call to action

Your reader has got to the end of your thread…now what?

You may just want to get people to engage with your content, and that’s a perfectly reasonable goal. But, if people have already committed to reading your thread, there’s a good chance they might want more from you, so make sure they know where to get it!

A call to action is always crucial, but it’s even more vital when the site you’re using isn’t your own. You need to be actively working at moving your Twitter audience from the social media platform to something like your email subscriber list. This is the only way you can guarantee a direct link with your audience and potential future customers!

Figure out what call to action feels right for that thread. That could be to check out the original long-form piece of content, your products/services, your free guide, sign up to your email list…any action that makes sense for you.

If you want more DIY repurposing help, get the complete guide to content repurposing: Content 10x: More Content, Less Time, Maximum Results. My book is the no-nonsense, implementable companion to repurposing every type of content!

TikTok for Business: How to Repurpose TikTok Videos