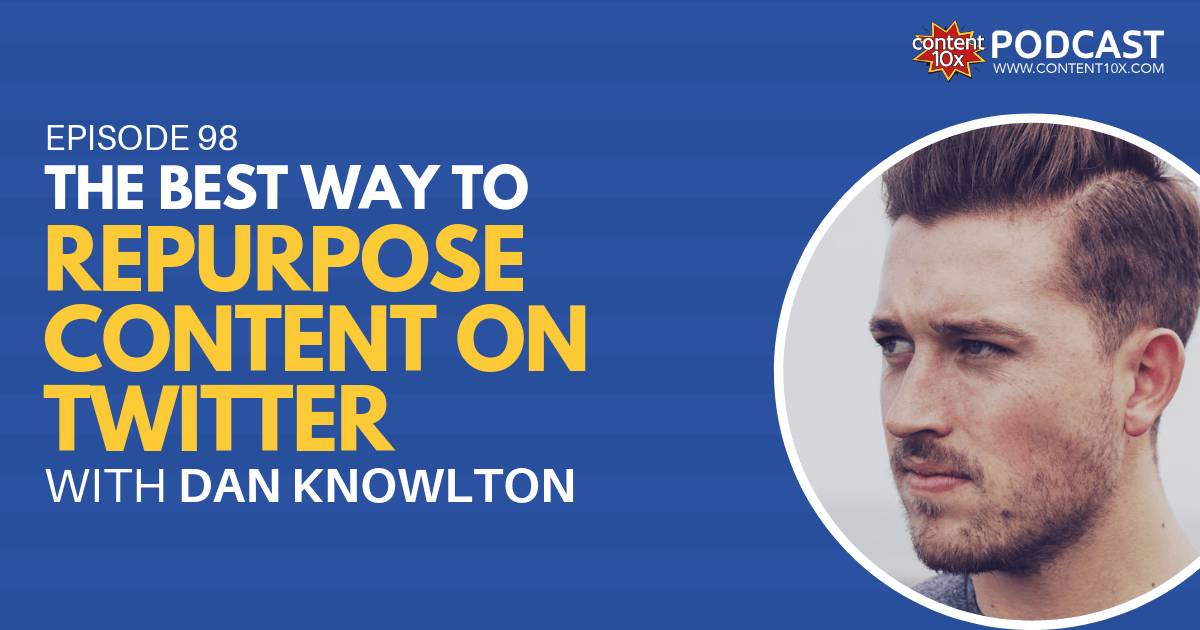 Twitter is a fantastic platform to engage with people. You can use Twitter to build connections, have conversations, and share your thoughts with the world. However, with 500 million tweets per day, how can you stand out and grow your audience? And, more importantly, how can you repurpose your longer form content effectively on the platform?

I spoke to social media marketing expert Dan Knowlton all about Twitter. He shared his expertise on how to crack the Twitter algorithm, how to use the platform in the most effective way, and how repurpose your content on Twitter.

Dan is the co-founder of marketing agency Knowlton. Along with his brother Lloyd, they have grown it into a multi-award-winning business. They have worked with global and local brands including FIFA, Nestlé, Citibank, Eurotunnel and Boston Consulting Group.

Watch a short video trailer for this episode below...

To listen to this podcast episode click the player below, or read on...

Twitter hasn’t followed the other story-based social media platforms like Instagram and Facebook. In fact, it’s always stuck with its core mission of allowing people to share their ideas and information quickly and in the most succinct way possible. We have 280 characters and that’s it. Well…we can share video too, but in that case we have just 140 seconds.

It’s about connecting and engaging with people “in the moment”.

Because it’s so quick and easy to reply (and very transparent as to whether you have replied/engaged or not), people are more likely to engage with brands and vice versa.

Twitter is the platform where you really can end up having a short conversation with people and brands that you previously thought were untouchable.

How can you use Twitter effectively for your business?

Twitter is incredibly noisy. There are millions of tweets every single day! With so many tweets swarming people’s feeds, what can you do to stand out?

When I spoke to Dan he emphasized it’s all about quality, NOT quantity on Twitter!

You do not need to feel like you should be keeping up with what’s going on. You should simply consume content in the moment, as intended.

I used to feel as though I had to tweet constantly to keep up with the fast-paced nature of the platform...as such I had little interest in it for a while.  Thankfully, I have since adopted a similar approach to Dan.

On Twitter, people are much more likely to engage with creative, quality content that presents a new idea or opinion that they might not have considered before

This is key when deciding what content to repurpose for Twitter and exactly how to go about it.

It’s important to think about what Twitter is used for, what makes it the go-to platform for sharing and obtaining information instantly, and how can you base your content around this? As I always say, be sure to respect the social media platform and don’t adopt a copy and paste approach.

It’s important to try and test out different types of content to see what works for you and what doesn’t. There are so many creative ways to engage with people on Twitter.

For example, why not repurpose some of your content by sharing it whilst relating it to a recent event happening in the news? If you can do this and use some trending hashtags too, you could reach an entirely new audience with your content.

How can you repurpose your content into a tweet that’s more likely to get retweeted by your followers?

Being bold and sharing your opinion and starting conversations is a great way to start.  The kind of tweets that demonstrate thought leadership on a particular topic, maybe presenting a new opinion or idea, work well. If you have an opinion or question to ask, you shouldn’t be afraid to tweet it! You’ll likely gain a lot of engagement because of it.

This is definitely worth keeping in mind when repurposing content. Ask yourself if you could present your content as an opinion or question?

So think less…”check out my latest podcast episode/blog post/video…” and more “What do you think about…?”.

You’re still drawing on the topic of your content, and hoping to get people to consume it, but on Twitter, you are getting conversations going as opposed to just broadcasting.

You can repurpose your podcast episodes or videos into video content on Twitter. We have a handy post all about repurposing videos onto social media here.

Interestingly, when I spoke about video content on Twitter with Dan, his top tip was to use the Twitter Media Studio to optimize your video. You can use this feature to make your content richer by adding a thumbnail, call to action button, title and description.

You can then tweet out your optimized video from within the Twitter Media Studio. It will be formatted nicely and look incredibly professional when you put it out there.

You can also use the Twitter Media Studio “producer feature” for livestreams on Twitter. During a livestream, you can go into the studio and cut certain clips to repurpose.

For example, you could cut a 30-second clip from your livestream then tweet it with a link to the full livestream! This can be done whilst the livestream is happening or afterwards and is an effective way to instantly repurpose live content.

Twitter Chats are a great way to network and engage with your audience, as long as you can keep up! They are usually very fast-moving, and you need to go in with a clear focus on exactly what you want to say and share.

However, they can be repurposed in a variety of different ways. When I spoke with Madalyn Sklar about repurposing Twitter Chats, she had so many great ideas from creating blog posts to have a post Twitter chat Facebook Live!

I asked Dan a killer question and he gave me a killer answer! I asked him how he would repurpose a podcast on Twitter - what approach would he follow and why? He broke it down into 3 steps:

This can include a text-only tweet, livestream, tweets with graphics, running polls, sharing video, sharing audio…etc.  Now you know what is possible.

Step 2: Go through the table and think of a content idea, based on your podcast episode, for each feature in Twitter

You can now use the table as a basis for your repurposed podcast content.

You could start a conversation going by sharing an opinion about the podcast topic…maybe even something controversial?!

You could create some video content based on the podcast episode. Short, teaser videos sharing some of the key points made? Could you run a poll?

Consider every feature and how you could make the most of it.

Once you have tested out the different features, dive deep into your analytics and see what worked best. Give it some time, content doesn’t tend to take off overnight. But in time, you’ll notice what your audience respond to the most.  This is the type of content you should go all in on, on the platform. 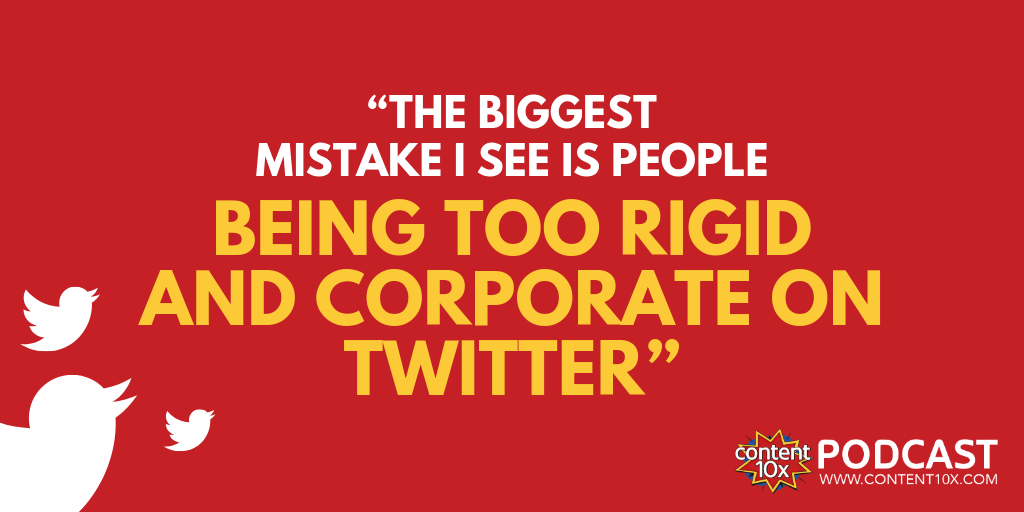 What is the biggest mistake businesses make on Twitter?

The most engaged brands in the world on Twitter include Netflix, Burger King, Wendy’s and Apple. They all have something in common, they all talk to their customers on Twitter like they are chatting to their mates. It makes them so much more approachable and relatable.

When I asked Dan what is the biggest mistake that businesses make on Twitter, he said it’s businesses talking like robots and using corporate language.  This doesn’t resonate with people. It’s important to speak from the heart and with emotions like you would in real-life.

This way, your audience are so much more likely to trust you and want to support your business.

Hopefully you are inspired you to try Twitter if you don’t use it already.

To find out more about Dan head to his website Knowlton Marketing and his Twitter for some great insights!

Why Now is the Perfect Time to Embrace LinkedIn Video