Have you ever taken part in a Twitter Chat?

I was keen to speak to someone who’s a real expert in Twitter and a number of my friends pointed to me to Madalyn Sklar as THE person to speak to. They were right!

To be completely honest, I had intended to speak to Madalyn about many aspects of Twitter but we started talking about the world of Twitter Chats and never moved away from it. This is a really fascinating episode, especially for people who want to get more out of Twitter but don’t really know how.

{To listen to the episode hit play below or read on for more...}

Madalyn is the host of two wildly popular Twitter chats - Twitter Smarter, which was launched six years ago and has since then amassed over 6 billion impressions and her second, Social ROI presented by Manage Flitter. She also hosts two podcasts, Twitter Smarter and she co-hosts Communities That Convert with Kami Huyse.

Madalyn explained that she first fell in love with Twitter when the platform was brand new. At the time, it was the only short-format social media platform and she loved that it forces you to be concise and to the point. Even better, she could have lots of meaningful conversations with people that didn’t take up tonnes of time.

But she doesn’t just stop there! I knew Madalyn and I would get on well when she said that she too is a great fan of repurposing content! Through the success of the Twitter Chats, she soon realised that there was more she could do to really make the most out of the content she was producing.

A Twitter Chat is a way to have a conversation on Twitter by using a specific hashtag, I.e #socialroi. They happen at a set time each week and the host of the chat will ask questions in their tweets, labelling them 1, 2, 3. Participants can then reply to those tweets using the hashtag to join in the conversation. It’s a great way to make friends and share knowledge with people around the globe.

On the podcast Madalyn explained that Twitter Smarter got popular very quickly and this was around the same time that Facebook Live was introduced. Madalyn loved Facebook Live and was keen to incorporate it into what she was already doing, so decided to repurpose the 1 hour long Twitter Chat into a Facebook Live stream. Guests are invited to join Madalyn and her guest on a video call straight after the chat where they discuss the topic of the chat in even more detail. 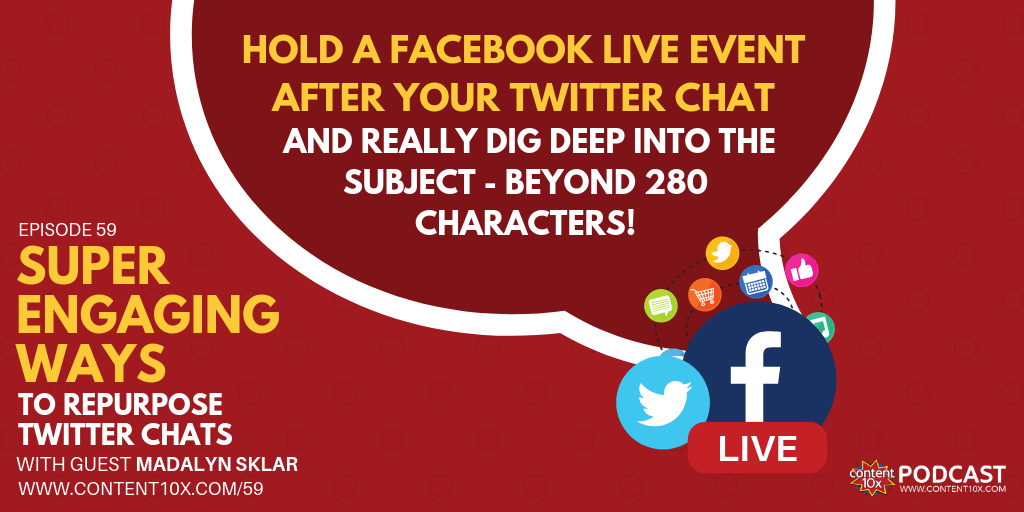 The Facebook Live events work brilliantly for a number of reasons - people are able to ask questions in real-time AND they allow Madalyn and her guest to really dig deep into the subject - beyond just 280 characters. They also appeal to a whole host of people who prefer content in video format than social media posts - one of the main reasons we love content repurposing!

Or, how about then extracting the audio from the Facebook Live video, and producing a podcast episode. Find out more here.

But the repurposing doesn’t stop there, oh no!

Did you know that there is a way you can eternalize your best tweets on Twitter?

You can do this by creating a Twitter Moment - and that’s exactly what Madalyn does for each of her Twitter Chats after every event (you could do this for things like your podcast episodes, too!)

Twitter Moments is a super cool feature that’s very under-utlized because people don’t know it exists. It’s an engaging way to curate a group of tweets and anyone can create one

Madalyn’s Twitter Chats are very popular and move very fast - it’s hard for people involved to see every tweet and every great takeaway. So, she uses Twitter Moments. Twitter Moments are a way to curate a group of tweets into something that lasts permanently on your profile. Just like Instagram highlights but for Twitter! You can create a moment about your own tweets, about an event, or testimonials that other people have given you. 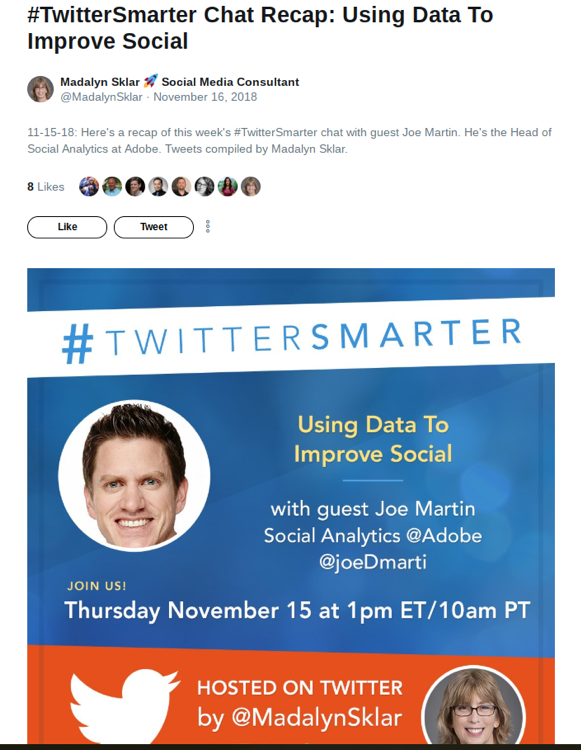 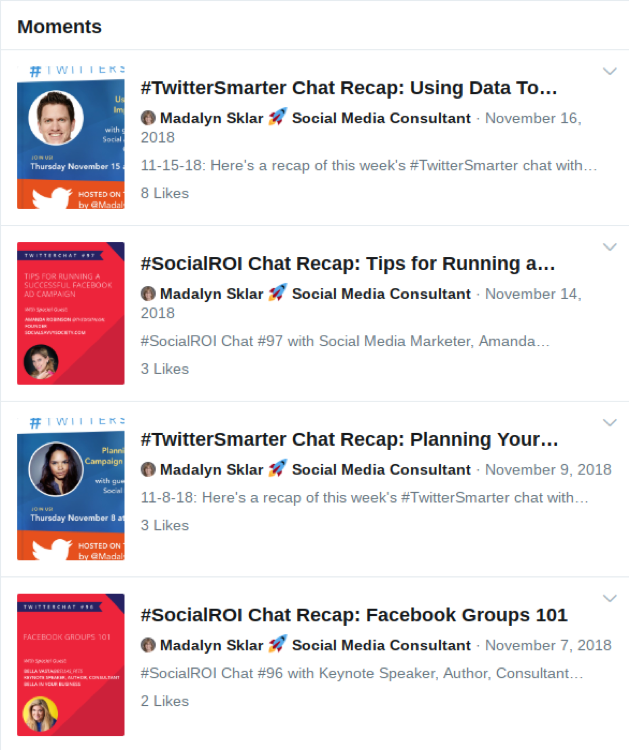 We also discussed how well Twitter Moments would work if you have a podcast, like Madalyn and I do. You could create a moment from all the tweets you’ve posted about the episode, or a round-up of tweets about every episode that you keep adding to, week on week.

It’s a really exciting way to repurpose tweets that are already out there in the Twittersphere, and not something that many people are currently doing. Starting now is a great way to gain exposure and make yourself stand out! 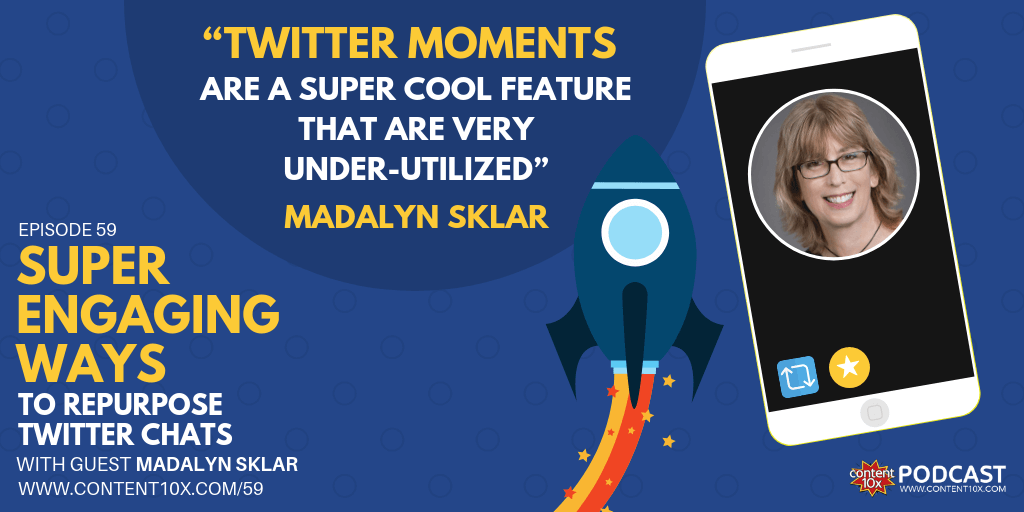 But the most detailed piece of repurposing is yet to be done!

This is another brilliant way to give Twitter Chats more longevity and repurpose them into a format that can be seen again and again.

The least time-consuming way to do this is NOT by taking screenshots, as I originally thought, but by taking the tweets and embedding them onto your website. Each tweet has an “Embed Tweet” option in the dropdown menu and you can just copy and paste this onto your website.

When IGTV came out earlier this year, Madalyn was super keen to find a way to incorporate it into her Twitter Chat repurposing. She started creating short videos where she would discuss the Twitter Chat just gone live and give her “two cents” on the topic.

However, Madalyn explained that for her this particular platform didn’t work well - she found that people just weren’t interested nor engaged. Therefore proving that sometimes, it’s better to focus on a few platforms that you KNOW will work than trying to do them all.

IGTV is still in its infancy, and we’re all still figuring it out. After the initial ‘buzz’ when it launched, activity on the platform does seem to have slowed down, but who knows what IGTV will be be a year or two.

Twitter have just come out with a new feature where you can live stream on the platform. This feature works on the mobile app and will show you, once you open the app, who is live streaming out of the people that you follow.

Who is excited to experiment with this new feature?

I can’t wait to see how it grows and develops – I anticipate it will be popular as followers will already be on Twitter after the chat AND already engaged with the content.

Whether you want to host one or simply participate in one, there’s so much to be gained from Twitter Chats and so much repurposing that can be done from them!

How to improve your interview skills with Sarah Goff-Dupont