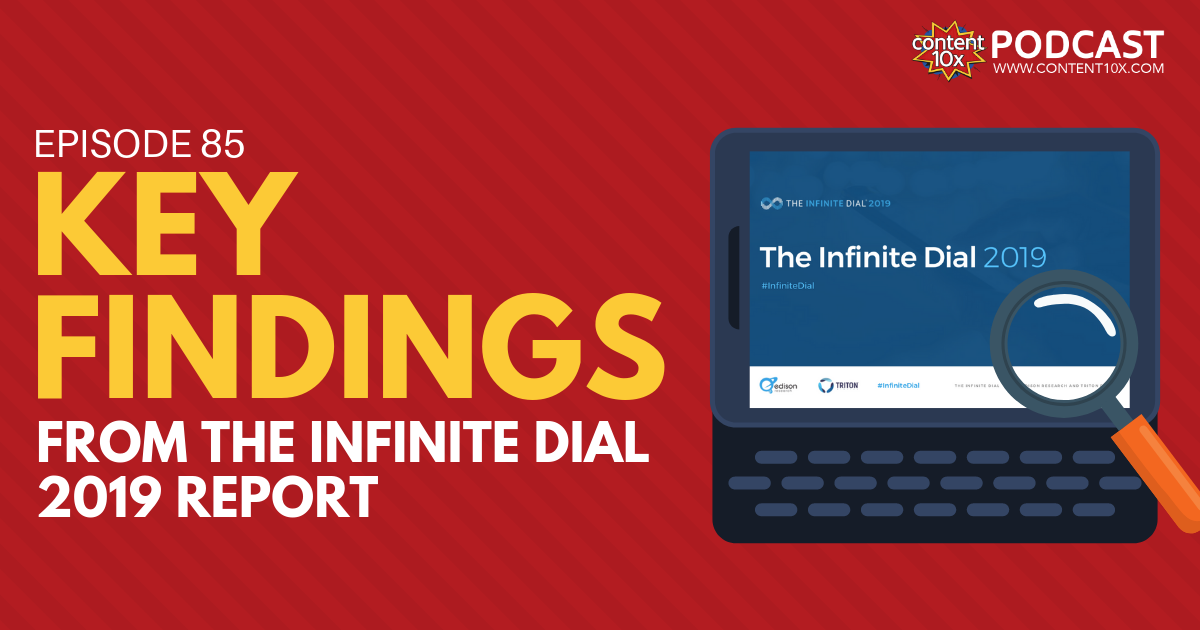 We can learn a lot about current trends and user behavior on social media by looking at the data uncovered by Edison Research and Triton Digital’s Infinite Dial 2019 report.

On episode 84 of the podcast, “Podcast Repurposing Has Never Been More Important,”  I shared insights from Edison Research’s Podcast Consumer Report 2019. We dug deep into the report and divulged lots of interesting insights into the ever-growing popularity of podcasts and why repurposing them is so important.

In this episode of the podcast (and blog post), I take a closer look at The Infinite Dial 2019. This is the longest running survey of digital media consumer behavior in America. It’s based on a national telephone survey of 1500 people over the age of 12 in the USA.

Participants of the survey are chosen at random. And, the study covers the length and breadth of digital media from podcasting to social media, smart speakers and more.

I’ll admit…every time the latest Infinite Dial Report comes out, I get super excited! Because as a content creator, I’m able to use key findings from the report to help me (and my clients) review our own social media and digital content strategies. The results from the report can help you identify what platforms to focus on and perhaps more importantly, where to focus your repurposing efforts.

After all, I always say that you need to make sure you create content for the platforms your audience is on. There’s no point posting content whenever and wherever. While trial and error is important, studies like this can be a huge eye opener. Digital trends change fast.

I dive into some of the key findings from this year’s report and look at how this information can be useful when it comes to strategizing and planning our own content marketing tactics.

To listen to the podcast episode hit play below, or read on for more… 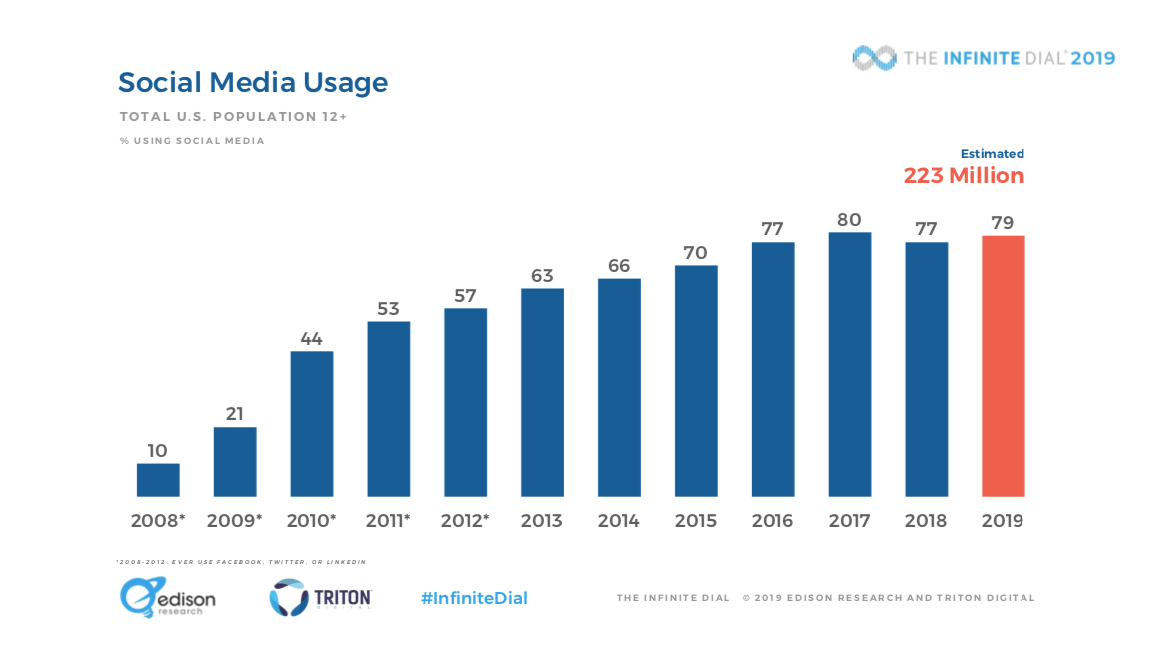 As it currently stands, a staggering 79% of Americans age 12+ say they have used social media. That’s estimated to be 223m people!

Obviously, that is a lot of people.

Perhaps even more interesting though is the fact that this number grew considerably between 2008 and 2016, which is hardly surprising since social media has well and truly taken over our lives!

Let’s face it, when we wake up, one of the first things most of us do is check our social media accounts. When we go to bed, quite often one of the last things we do is check social media. And, let’s not even think too much about how many hours we spend during the day on social media. This is something I’m personally trying to crack down on!

The report shows that since the spike in 2016, social media usage has leveled off considerably.

The number of people using social media is no longer on a steep upward trajectory with the average percentage ranging between 77% to 80% over the last four years.

Looking at the Infinite Dial Report 2019, I’ll admit that there aren’t any ground-breaking revellations or surprises in terms of brand awareness of the social media platforms. 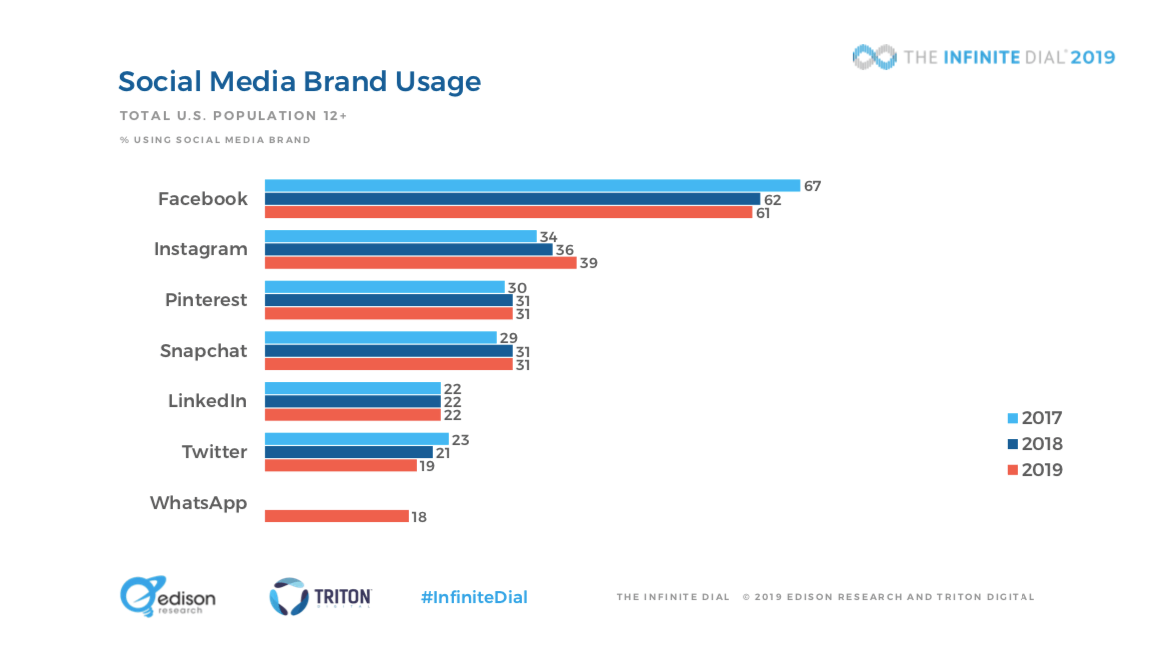 On a side note…was it just me or is anyone else surprised to see Pinterest included in the results?

I would consider Pinterest to be a search engine vs social media platform. Nonetheless, it’s useful to get that data. WhatsApp is another newbie to be included in the survey…not really social media either but still interesting to find out how many people use it and who.

Social Platforms that saw a Decline

The biggest decline in usage was Facebook from 67% to 61%.

Although they still have plenty of users at an estimated 172m, they’ve lost 15m users in just two years.

That’s still A LOT of people using it! I guess time will tell whether Facebook will continue to decline or miraculously turn this around. What’s really interesting though is the revelation that the majority of Facebook users who don’t use the platform as much are 12 to 34 year old’s.

As younger generations continue to leave, users age 55+ are on the rise. Younger people are more split between Facebook and Instagram.

If you ask me, the reason behind the decline in younger users is a classic – I don’t want to hang out where my parents are (or even grandparents)!! 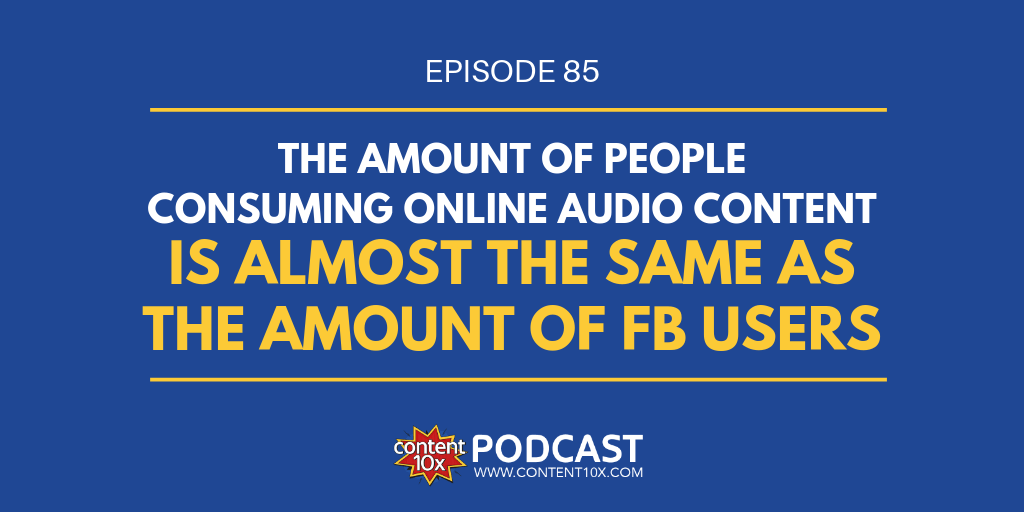 The Infinite Dial Report also looks at media and technology.

Smart speaker awareness is on the up and it looks like more people than ever are purchasing them and using them in their homes. According to the research, 23% of the U.S. population over 12 years of age own a smart speaker. That’s an estimated 65m people!

With the popularity of smart speakers on the rise, it’s good to start thinking about ways to get in front of your audience on this growing medium.

Have a listen to episode 69 of our podcast, “How to Repurpose a Podcast into an Alexa Flash Briefing with Sigrun,” for tips on how to repurpose your content for smart speakers.

It’s clear from the Infinite Dial Report that there are literally millions of people on social media and you can bet your bottom dollar that your audience are on social media. Even the lesser represented platforms sill have a magnitude of users. If you want to reach the right people, you have to know your niche. You also have to know where your audience are hanging out online.

If your content is aimed at a younger audience you probably shouldn’t put all of your efforts into Facebook since it’s mainly catering to an older audience.

Instagram and LinkedIn are two platforms on the rise. Check out episode 79 of the podcast with Sam Rathling for lots of great tips and insights on LinkedIn.

The results also show that audio consumption is on the rise too.  Time to start a podcast? Time to create daily flash briefings on Alexa? How can you create audio content?

If you’re trying to reach people online it’s worth paying attention to the key findings from this report as it’s all relevant, up-to-date and useful.

How to Do More With Less