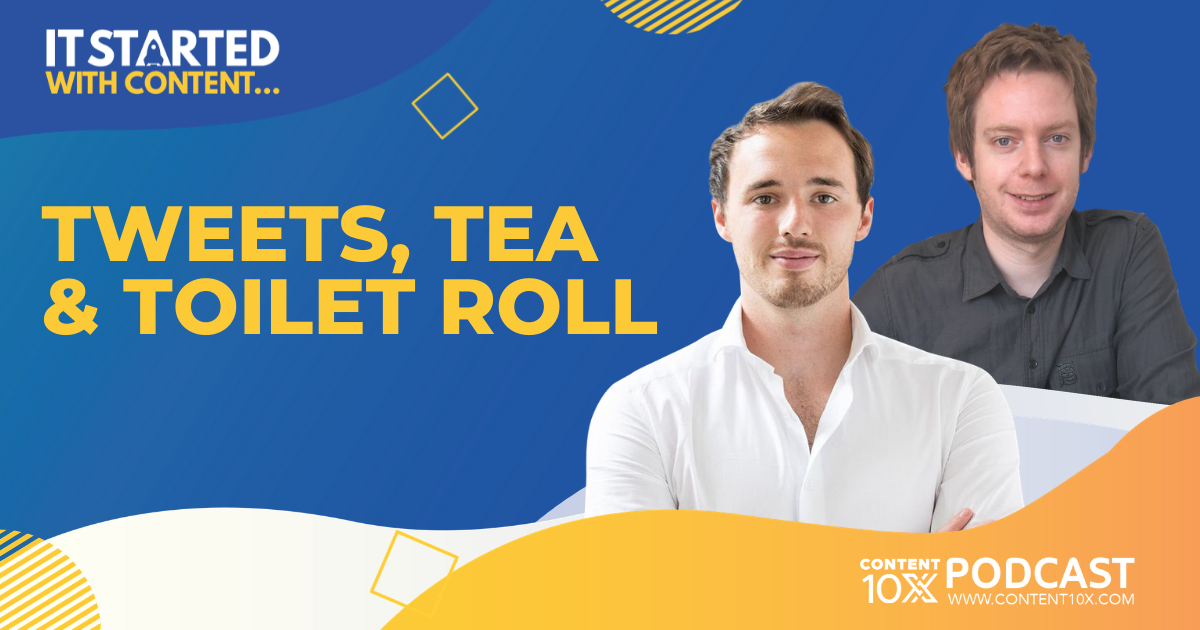 While many other social media platforms are increasingly focused on video and image elements, Twitter still reigns supreme as the king of micro-text content. Making it a more unique platform than ever before.

Twitter’s USP has always been this restricted text-based format. For some of us, this might be frightening. How on earth could you grow a business in less than 280 characters?

But for others, it’s a golden opportunity to pack a punch with short, snappy content.

Like any platform and type of content, you have to find what works for you. But if you’re trying to grow your brand on Twitter, there are some great examples of people you can learn from…

In this episode of the It Started with Content case study series, I share two tales of Twitter success. Dominic McGregor and Rob Temple both turned to Twitter to tweet about their funny problems, little did they know it would lead to some seriously good outcomes!

…watch the video below…

…or keep reading to find out how Dominic and Rob turned tweets into businesses and bestsellers (respectively).

From toilet-roll tweets to entrepreneurial feats

Social Chain is a giant in the UK marketing industry. The company employs over 750 people, has offices in 3 countries and turns over hundreds of millions in revenue each year. But it may never have existed if the Co-Founder and ex-COO hadn’t started a comedy twitter account.

In 2013, student Dominic McGregor ran out of toilet paper (yes, that’s how this story starts)! 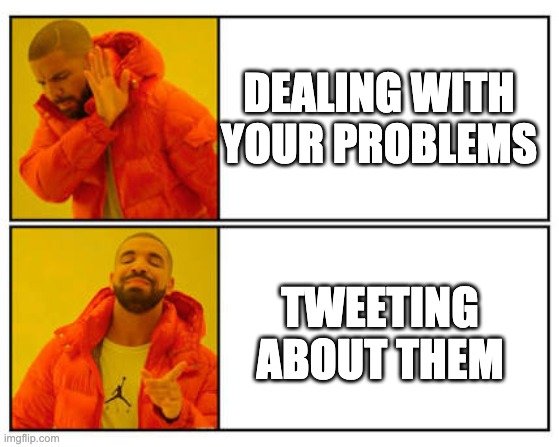 While it sounds like Dominic started his account on a whim, he pinned this unlikely move down to spotting an opportunity ­– and wanted to strike while the inspiration iron was hot.

In 2013, Twitter was surging in popularity. Seeing an opportunity, I started Student Problems.

Fast forward 7 years and history is repeating itself with TikTok.

It wasn’t enough to just start the account. Dominic actively grew it. He used hashtags such as #universityproblems to help people find his content and began creating content relentlessly.

That’s almost seven tweets a day – so a LOT of consistent tweeting!

But Dominic’s dedication paid off and once the account started gaining traction, it grew and grew.

@studentproblems had so many followers that budding entrepreneur Steven Bartlett reached out to Dominic to discuss working together. He wanted to promote his website on the Twitter account. This drove so much traffic to Steven’s site that the two spotted a brand-new business opportunity.

Tweeting to the top

Only a year after tweeting about his lack of toilet roll, Dominic and Steven secured funding for their business venture – Social Chain.

Dominic’s tweets had such a huge audience that they could powerfully spread brand awareness in less than 280 characters. People liked Dominic’s content, it was relatable and funny. So when he shared a link, people were more likely to click on it, because it was never a hard sell.

Plus, the audience would stick around for the funny content even if they weren’t so interested in the brands the account shared. It was a win-win.

Dominic and Steven took this concept and expanded it into their business ­– repurposing at its absolute finest!

Social Chain grew formidably fast and since starting the company, the two have won awards for their entrepreneurship.

7 years after co-founding the company, Dominic and Steven have both now left Social Chain to pursue other ventures. But the success of the company is undeniable – and likely would never have happened in the way that it did without Dominic spotting and capitalizing on the power of Twitter.

But this isn’t the only example of retweets to revenue…In fact, this next story is so prolific, I’ve actually shared it before in episode 117. You can check that post out here or keep reading for a quick recap and some updates to the story.

Nearly every time I go on Twitter ­– or any social media account for that matter ­– I’ll see retweets or shares from a novelty account. Very often @soverybritish (VeryBritishProblems) will be one of those accounts.

This hilarious twitter account never fails to make me laugh. But who’s behind these witty quips? And how did it get started in the first place?

The answer is British journalist, Rob Temple. He was persuaded to start a Twitter account by his editor back in 2012.

At the same time, a friend serendipitously sent him a link to an article about “20 funny things Brits do”…Rob thought ‘there’s way more than 20!’ and was inspired to start tweeting out about the strange ways we Brits behave.

In an extremely rare twist, Rob’s Twitter account actually was an overnight success…in just one day, the account had 1,000 followers. By the end of its first month, it had over 100,000 – and interest from a book agent.

I believe that the VeryBritishProblems account was so popular for three reasons.

Rob’s experience as a journalist meant that he wasn’t just throwing together any old text. He was playing to his strengths by choosing a text-only platform and crafting content using his skills.

Rob’s tweets are written by and for awkward British people. Us Brits love to poke fun at ourselves, so it was a comedy match made in heaven!

Rob packed quick punches with really short content. One-liners often get some of the biggest laughs and this drives people to action. Think about it, if someone can make you laugh in just a few words, why wouldn’t you want to follow them?

Today the account has an astonishing 3.9m followers. Rob still tweets his witty remarks about everything from the weather to British culture. But it didn’t just grow through tweets.

From retweeting to repurposing

The brand also lives on other social media platforms such as Facebook and Instagram, but most impressively, has been repurposed into a column in U.K. newspaper The Telegraph and a TV show!

There’s also a series of Very British products, including mugs, t-shirts, games, and more. That’s right, the tweets have even become physical products!

This is a great way to repurpose your way to extra revenue and expand your brand. Something Nicola Semple explained in my podcast interview. Find out how Nicola repurposed her content into physical products in this episode and blog post.

While Rob may still be tweeting about the weather and cups of tea, the powerful combination of great Twitter content and repurposing has grown the account into so much more. It’s now an established brand.

So, isn’t it funny how both Twitter accounts found fame sharing #problems…I think content has helped them find more than just solutions!

I hope you’ve enjoyed this installment of It Started with Content. Find more of our case study stories here.

If you’re ready to get started with content, we can help. We provide specialist services to help you launch a podcast or video show. But that’s not all. We then support you with weekly repurposing so you can maximize your content’s reach every single week. Check out our services to learn how.

It Started with Content: Four Key Lessons from Successful Brands and Businesses

It Started with Content…From Amateur Vlogger to Master of YouTube