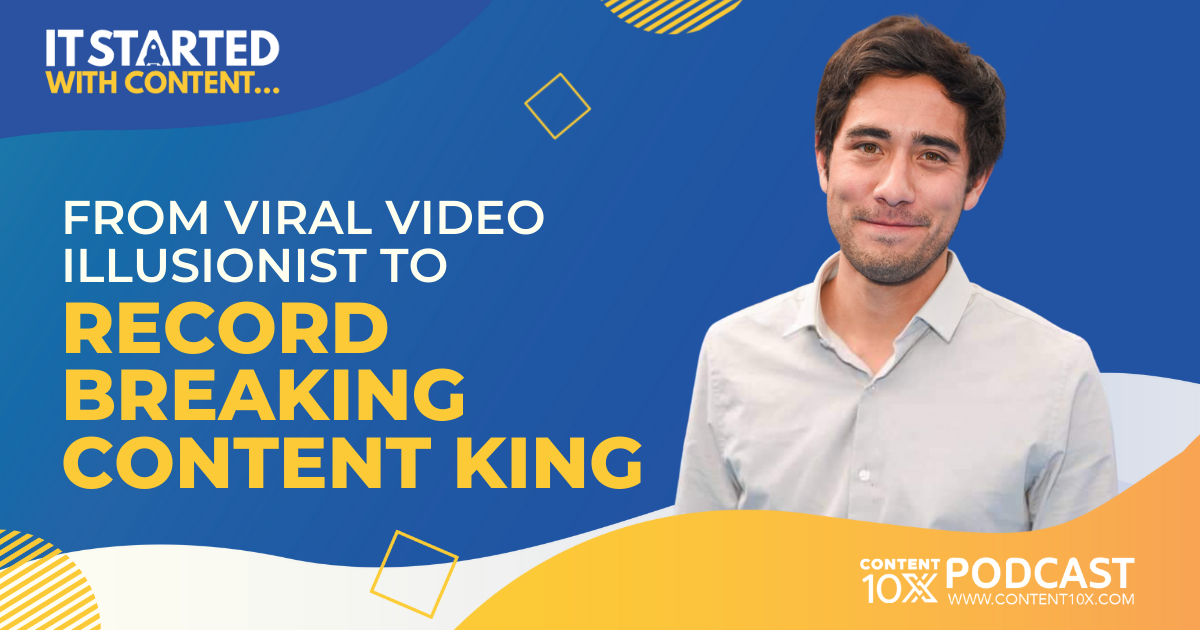 How long does a video have to be to go viral?

(That’s a bit of a how long is a piece of string question, isn’t it…)

With the rise of TikTok and Instagram Reels, it seems like the shorter the video, the more likely it is to go viral. And there are a few creators whose content supports this theory.

One of which is the master of short-form content, Zach King.

At the time of writing, Zach King’s videos are 4 out of the top 5 most watched videos on TikTok ­– with nearly 5 billion combined views. He’s also the world-record holder for the highest number of TikTok followers for a male creator.

The video illusionist has taken the social media video game to an entirely new level and, at the same time, built a business where he can really stretch his magical muscles. He works with some of the biggest brands in the world and he’s authored a series of children’s books.

In this episode of the It Started with Content case study series, I share the secrets to this video magician’s success.

…or keep reading to discover what makes Zach’s story so magical.

Who is Zach King?

Zach King currently has more than 105 million followers across a range of platforms.

Zach is a video illusionist. He creates incredible short form videos that captivate audiences worldwide and that go viral more often than not. He describes his style as “video sleight of hand” – if you’ve seen his content, you’ll understand why!

I had the pleasure of meeting Zach a few years ago at Social Media Marketing World in San Diego (a huge fangirl moment!). Looking back, it seems like one of those serendipitous things meeting Zach, and now being able to share his story in this series. 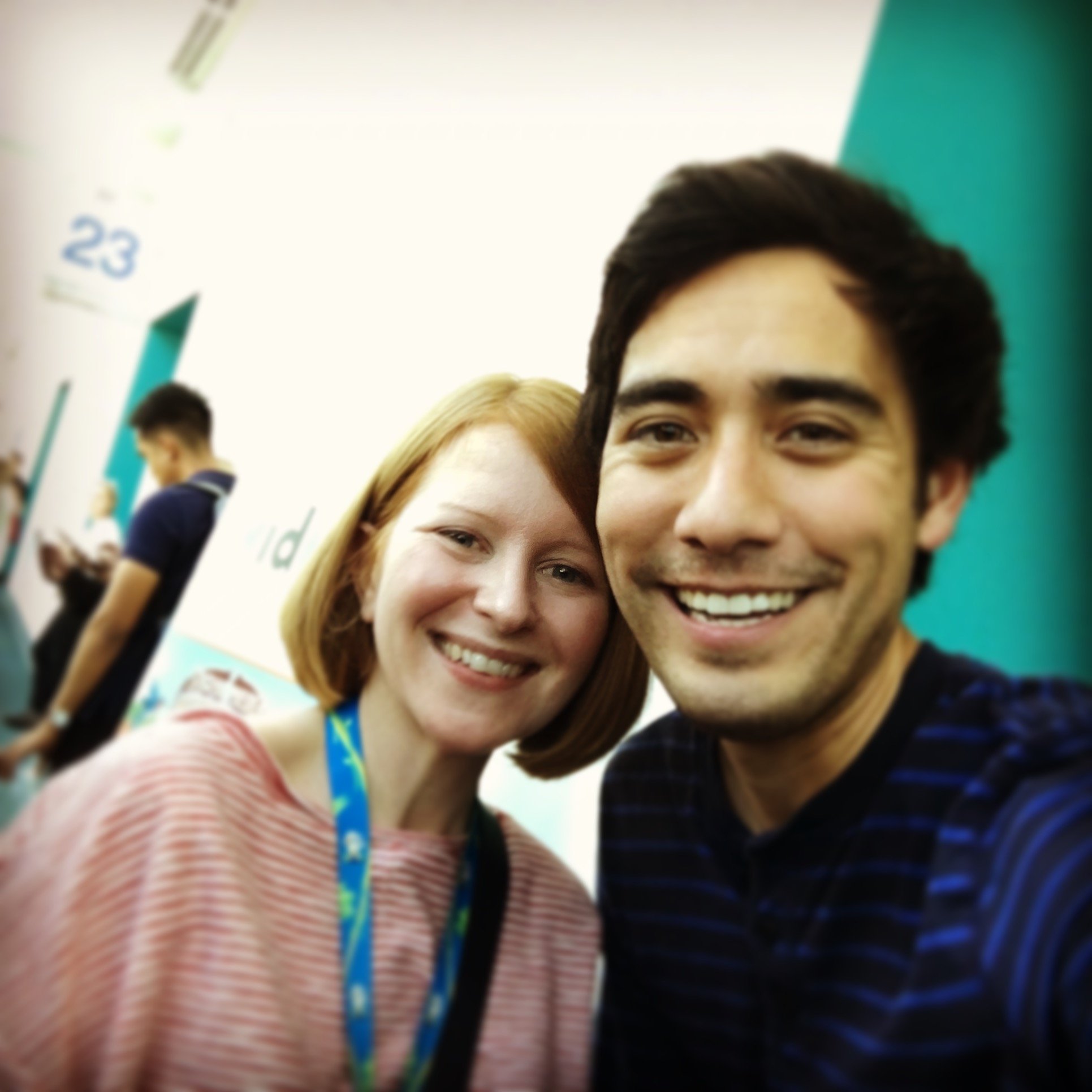 So, let’s get into the story behind this video magician’s success…

YouTube is the platform for any video creator, regardless of video content, length, style ­– if you want to be known for video, you have to have a presence on this platform.

Zach started his first YouTube channel, Final Cut King, in 2008. He’d been passionate about creating video from a young age, taught himself how to use Final Cut Pro, and took every opportunity he could to create and experiment with video.

After graduating college with a major in filmmaking, Zach started a YouTube channel as a way to showcase his skills and help others. His content was primarily video tutorials, teaching others how to use Final Cut Pro.

So why was Zach giving away all this knowledge for free? Firstly, he was super passionate about creating video content. Creating videos for his own channel allowed him the freedom to experiment and improve his own skills, meanwhile he was also sharing knowledge with others.

This played into Zach’s wider strategy to share just what he was capable of. Creating content and sharing it via YouTube helped Zach show people, businesses, and big brands what they could achieve if they worked with him.

When Zach discovered visual effects (VFX) it opened up a whole new world of content opportunities for him.

He started to create the illusion videos he’s known for today ­– stretching the boundaries of what’s possible with the tools available to him to create weirder, wilder, and more magical videos.

VFX gave Zach his first big content break with “Jedi Kittens”. When Zach first posted this video to YouTube back in 2011, it skyrocketed to a million views in just three days.

If you want tips and advice about creating, repurposing, and distributing your content, then do check out my book, . It’s the ultimate guide to content repurposing, with everything you need to know about amplifying your brand’s reach on all the major content sharing platforms.

Bear in mind this was 10 years ago!

But going viral once isn’t enough to become a true content king, it wouldn’t be until two years later that Zach would find a platform that truly suited his individual video style.

To understand how Zach got to where he is today, you need to know about a video sharing app called Vine.

Vine was a six second video platform that launched in 2013 and came to an end in 2017. The original concept for the app was to share videos of your daily life, like we share stories on Instagram today.

Now Instagram stories hadn’t been invented yet, so the platform was way ahead of its time!

It was also the first video platform to focus on micro-content. The unique and innovative style inspired people to start using Vine in more creative ways – enter Zach King.

Zach’s YouTube content had been all about pushing the boundaries of what was possible on YouTube. Magic tricks were the perfect content for this, keeping audiences captivated and wanting more. But Vine was the vehicle that would explode these videos to the masses.

Vine became Zach’s playground. The eye-popping magic tricks kept people watching the videos 10 or even 15 times over, as they tried to work out how he’d created his spellbinding videos. The videos earned him 4 million followers and more than 1.4 billion views.

Zach was one of the most iconic creators of the platform and his following soared.

But then Vine closed down.

If you’re a content creator, you’ll know how important it is to make sure you can access your audience on a platform you own (e.g., your website, email list, etc.). If your following is on a platform which you don’t own, and it closes down, you could lose them all.

But Zach had been smart about his content strategy. He’d not put all his eggs in one basket, he’d diversified across the content platforms by repurposing his videos to other channels. In fact, if you go to his YouTube channel now, you can watch all of his original Vines.

In fact, Zach’s short-form content is such a hit, he is even more successful on TikTok today than he was on Vine. Here are some stats to show just how popular his content is:

But TikTok isn’t the only space Zach has seen incredible growth in. He’s also built a team around him who’ve become core to the Zach King empire. Alongside these people, Zach has transcended from video illusionist to video master.

Today, Zach works with big brands including Disney, Coca-Cola, Universal Pictures and more, to help them create truly magical content. If working with big brands, being a video leader on social platforms, and running successful businesses wasn’t enough, Zach is also pursuing his passion and other big dreams.

He released a series of hugely successful children’s books, worked on multiple TV projects, and is hoping to one day create and produce big blockbuster films.

I am rooting for Zach in all of his wonderful endeavours and know that we can expect much more to come from this fascinating creator!

So what can you learn from Zach’s story? I think there are four lessons to take note of…

It might sound easy to create six second videos and watch them soar to success, but Zach recalls spending 24 hours creating each Vine, pulling all-nighters, and really putting in the work.

You’re never going to want to pull those all-nighters unless you have something driving you. For Zach, it’s his dream to be a filmmaker, and he views each video he creates as a mini movie for the little screen.

Zach knows what he’s good at, so by getting on the platforms that support his awesome short-form content early, he can establish a name for himself before anyone else. Making the choice to go all-in on TikTok was easy when he’d been such a success on Vine. All he had to do was keep creating and wait for the platform to gain traction.

Repurposing and distributing his content across multiple platforms not only helped him survive the rise and fall of Vine, but grow his audience exponentially. He knew that creating gold-star content is one thing, but helping it reach as many people as possible is another!

So Zach’s story definitely isn’t all smoke and mirrors ­– his video illusions are the real deal. Hopefully his story inspires you to put some magic into your content!

Check out more It Started with Content stories here.

It Started with Content: Four Key Lessons from Successful Brands and Businesses

The Best Way to Repurpose Content: Long-Form to Short-Form or Vice Versa?