How to Repurpose a Podcast into a Cartoon Video Animation 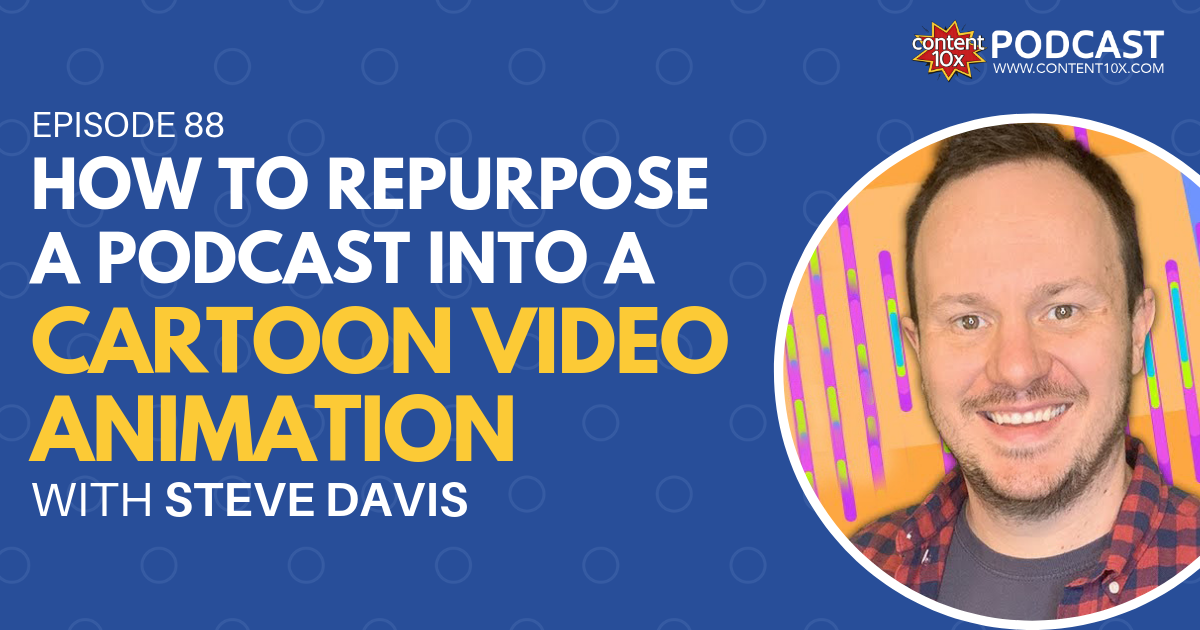 If you have a podcast, repurposing your episodes into an avalanche of new content is one of the best ways to spread awareness.

Repurposing your content can also lead to attracting more listeners and help you reach a larger audience. With the popularity of podcasts continuing to grow there's so much content to consume online. As a result you’ve got to come up with creative ways to stay top of mind, and if you repurpose your podcast that's a great place to start.

In this week’s podcast episode, I’m excited to introduce you to my special guest, Steve Davis (aka Studio Steve) to talk about his awesome podcast repurposing.

Steve is the creative director of H13 Radio and the producer and host of Pod Sound School. Steve has been obsessed with sound and specifically recording and manipulating electronic sound since he was a child.

In 2017, he started his own recording studio where he specialised in recording and producing for bands and hip-hop artists.

All of this experience and passion over the years led him into the world of podcasting. He loves telling stories and painting pictures using audio. And, podcasting has become one of his greatest passions.

Pod Sound School help podcasters sound awesome and I’m personally a huge fan of their work. In fact, I had the absolute pleasure of being on the Pod Sound School podcast recently to talk all about how to repurpose a podcast. I was so blown away by how amazing the repurposing of that episode was that I HAD to invite Steve onto my podcast to talk about it in more detail.

Trust me, this is an example of podcast repurposing you won’t want to miss!

Hit play below to listen to this episode and/or keep reading for more!

Steve, his wife Veronica, and the Pod Sound School gang help people improve the sound of their podcast.

When I was a guest on Steve’s podcast, we had a great discussion all about content and podcast repurposing (no surprises there). The experience and in-depth conversation with Steve about repurposing was amazing. But what came after the recording ended was what really blew me away.

Expanding Beyond a Podcast

Instead of publishing the episode as an audio version and leaving it like that, Steve took the episode through an entire repurposing process. His reason for doing so is because he and his team wanted to “expand it beyond a podcast.” And, repurposing the episode gave him the ability to do that.

First, they took the original script from the episode and repurposed it into a blog post.

Then, they took the audio and repurposed it into a video.

But it wasn’t your run of the mill video. No, that would’ve been too mundane for Pod Sound School! They wanted to create something that stood out from what other podcasters were doing.

So, they took the audio from our interview to repurpose the podcast into a hilarious animation. We’re all about being content superheroes here at Content 10x. And, Steve played homage to that. So, I’ve officially lived my childhood dream and become a cartoon character with a superhero cape and everything!

It’s so cool how they took my voice from the podcast interview and did that!

I’ve talked about repurposing audio content into video a lot on the podcast. In episode 3, I explored, “5 Ways To Repurpose Your Podcast Into Video,” and did a complete podcast repurposing overview in episode 36 – “Epic Podcast Repurposing.”

But, I’ve never covered how you can repurpose your podcast audio content into a video animation. Steve walks us through the process. He details how he begins by firstly shortening the length of the podcast interview for YouTube.

As you probably know, the YouTube audience prefer to consume shorter content. So, cutting the original interview down to fit this channel was the first step.

On the technical side of things, they used Adobe Creative Cloud to create the animation. With Steve’s experience with video production, bringing his team’s ideas to life came easy for him. Although he did admit it was a bit of a learning curve.

A graphic designer then used Adobe Illustrator and Adobe Character Animator to design my animated character and bring it to life. The second program allowed them to move my character’s mouth like a puppet. Then, Steve imported my audio track from the original podcast recording and synced it with my cartoon character – impressive!

When Steve has finished repurposing his podcast into an animated video, he then uses an app called Manifesto. This app allows him to upload videos and images and quickly edit a shorter video to share on social media.

The Manifesto app has various uses:

We do this all the time at Content 10x but instead of using an app, our creative team works their magic to produce high-quality, tailored teasers for our clients.

But if you’re a start-up and you want to take the first step into audio to video repurposing, a handy app like Manifesto is a great place to start!

Why Audio to Animation Repurposing is worth it!

Although repurposing audio to animation takes time, the outcome is 100% worth it.

I love how creative Steve and his team are. When we recorded the podcast episode together, I never would’ve imagined it would be repurposed in such a unique and creative way. It proves that there are so many things you can do with audio content. You just have to think outside the box and come up with new, creative ways to repurpose it into something that your audience is going to love. 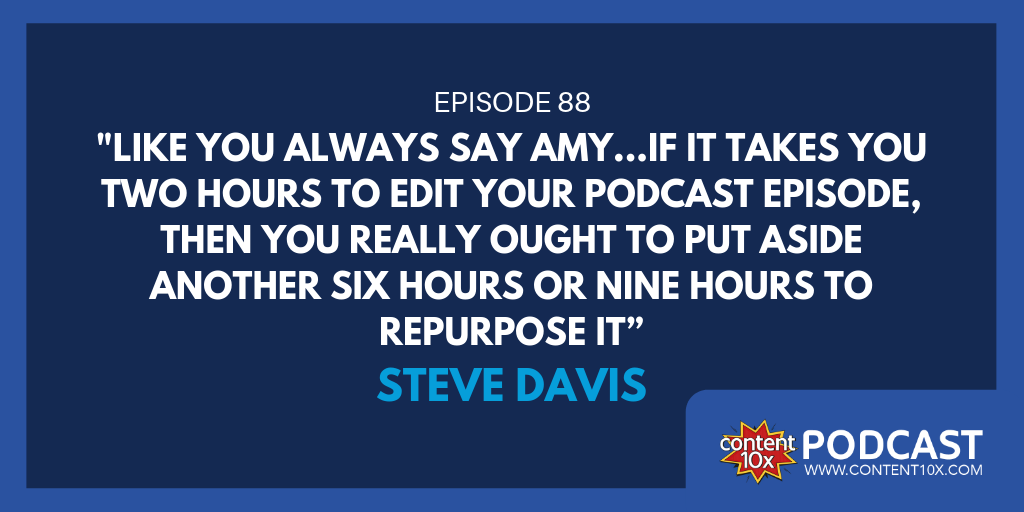 Look…I couldn’t very well have Studio Steve on the show and not ask him to share a few drops of his audio content wisdom with us!

So, I asked him what one piece of advice he would give to anyone who creates audio content in terms of improving the sound quality. And, he didn’t disappoint!

When it comes to podcasting, Studio Steve says that it’s important to invest in a quality microphone and to talk really close to it.

Get a pop filter (or two) and the closer you speak into the microphone, the clearer the sound will be. Plus, doing this helps to cut out what’s referred to as the “noise to signal ratio,” which is the background noise in your room.

I really enjoyed having Steve as a guest on the show. I hope you feel as inspired as I am to think of creative ways to stand out from all the noise!

If you want to find out more about Steve and the Pod Sound School, you can visit their website for more information. You can also read their blog for lots of great audio tips. And, check out their YouTube channel to further examples of a podcast to animation repurpose!

How to Incorporate Animation in Your Repurposing Plan with Christine MacKay